Home » Turned Taquete » OK, I Think I’ve Got It

(This blog post was originally published November 22, 2013 on my first blog site, which is no longer in existence.)

When I started thinking about Turned Taquete on 8 harnesses last summer I came up with a simple profile draft in a positive/negative window pane design. My weaving software has a block subsitution feature which transforms a profile draft to the structure of your choosing. I picked Turned Taquete and this 16-harness weave draft was the result: 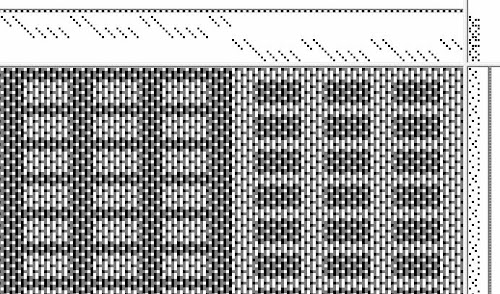 Ok, it was the look I wanted, but not the number of harnesses.

Not to be deterred, but clearly not working on it full time, I thought about this issue occasionally. Gradually, it dawned on me that I could work around my limitations. I wouldn’t have exactly the same weave draft, but I could come close.

First I considered the color drafts in both threading and treadling. Look closely and you’ll see that in the threading black and white alternate, while in the treadling only one color is used, a mid-tone neutral gray. There are areas of solid vertical stripes and areas of rectangular blocks. I decided to change out the black/white alternating areas in the threading, where we see the solid stripes, with solid, non-alternating areas of color, while keeping the black/white alternation in areas of rectangular blocks. In addition, I used the same neutral gray in the treadling color draft.

This is the result:

I think I’ve got it!

Ok, not exactly the same draft, but pretty darn close. I could get closer by repeating the sections on harnesses 1-4 and 5-8 two or three times, but I kind of like this as it is.

I like that by using solid areas and alternating areas of color in the threading you can see six different areas of color and structure in the weave!