(This blog post was originally published May 16, 2013 on my first blog site, which is no longer in existence.)

I wove the rug pictured below in 1988, right after I graduated with my Master’s Degree in Craft Design from Iowa State University. I did an in-depth study of block weaves and computer-aided design. At that time there were a LOT of different little micro-computers and weave design programs. I used a funny little program on an Atari computer to run a compu-dobby attached to a Macomber loom in the university weaving studio. At home I purchased a program for the Apple IIe called “Pattern Master IV” from the company that later became AVL Looms.

I used that program to design this rug, and wrote it up in an article for the long ago defunct weaving magazine The Weaver’s Journal. They wanted to publish it, but they ran out of funding and were never able to do so. So my article sat in a folder ever since then. I always liked my design and the rug I wove. I’m not sure if I still have it. But the design remains one of my favorites.

The rug itself is woven using boundweave on Summer and Winter. This is a weft faced structure in two colors of rug wool with a linen warp. The article (see below) has more specs. 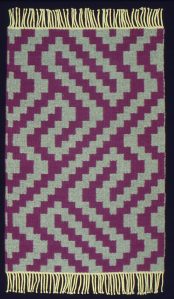 I recently scanned the article to PDF and uploaded it to Scribd, where it is now available to read. But I warn you, there’s a lot of writing about designing double two-tie twills, which kind of made my head explode. Also, there’s a lot of stuff about working with Pattern Master IV, which you can feel free to skip over (after you stop laughing). The article is mainly valuable to me for the profile draft of the woven rug, which I can use in other weave structures. My old fave Diversified Plain Weave comes to mind…

In my previous episode I casually revisted an old project that I turned into armrest covers. The book from which I took the draft for that project named the structure “double two-tie unit weave varied by two weights of yarns.” You will recall that this book is Kathryn Wertenberger’s 8,12…20 An Introduction to Multishaft Weaving. Interweave Press, 1988.

Here is my simplified rendering of the unit structures from this draft. On the left is the front side view, and on the right is the back side view. This is a thick and thin structure, so the drawdown reflects that with the ultra-teeny tie-down threads on harnesses 1 and 2, and the ultra-teeny treadling on the tabby wefts: 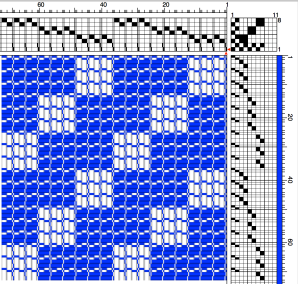 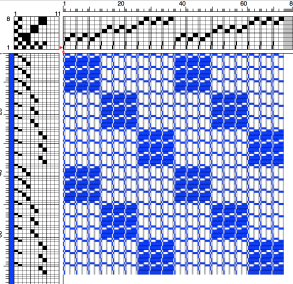 In a seemingly unrelated sequence of events, I was sorting magazines and sorting books and making some choices about where to put them on some new bookshelves in my studio, when I was surprised to find the same project by Kathryn Wertenberger for Asian-style mats in a very early issue of the Handwoven Magazine’s Design Collections. No. 2 to be exact. Published in 1981.

In this early version of the project the fabric description is “Modified double summer and winter.” Same mat, same threading and treadling, but different tie-up. Here is my rendering of that draft: 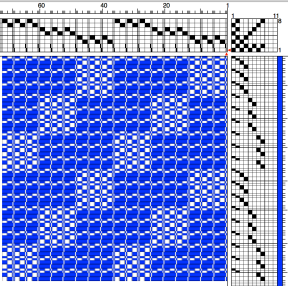 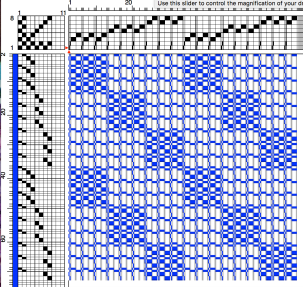 I am inclined to favor the description of the structure as modified double summer and winter (as in the Design Collection magazine). But, I favor the tie-up in the book. So go figure. And don’t get me started on the epi (it is 20, not 21).

Just chalk all this up to ravings of someone who has been weaving so long that I’ve forgotten whole projects. To wit: I found notes for another project in this weave structure that I wove in different colors in 1991, seven years before the purple runner of 1998. Plus. I found another runner of the same design in yet another colorway in a box in the attic with some other woven items that I forgot about (from 1991-ish, I presume) that I have no notes for at all. Bad form. Really bad form.

Those who have both publications in their libraries, should take a look at both drafts. Then scratch your heads.

Technical details: I chose different yarns and setts for my runner projects compared with the published projects. My thin warp and weft was 40/3 cotton and my thick warp and weft was 5/2 cotton. I sett the warp at 32 epi, 4 per dent in my 8 dent reed.

Here is a quick photo of the project-with-no-record in my notebooks: 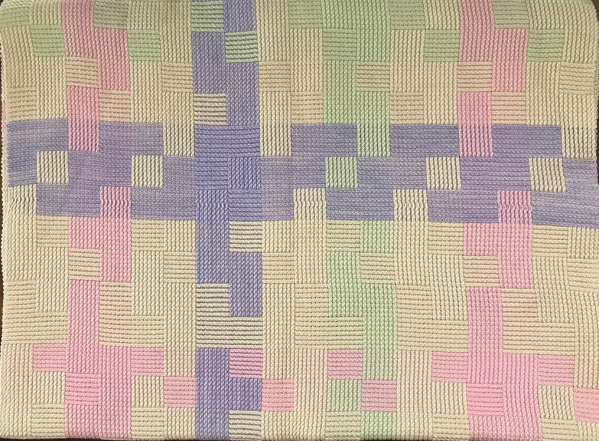 I’ve had a dishtowel warp on the loom for months. Oh wait, was it only April? That’s not that long…. sigh.

I wound enough warp for six towels, the most I’ve planned for, ever, because I’m not exactly a production weaver. More like a see-where-my-whims-take-me weaver. But, my pattern seems to be that my measuring/estimating skills are not quite up there with the professionals. That last towel turned out to be a placemat. But I love it anyway…. 😉

Truth is, just about all, OK all, of my dishtowel warps have just enough left over for a small mat. My collection is growing.

This warp was threaded in my Circles draft for Turned Taquete. I alternated natural color 10/2 cotton with different color stripes of 10/2 cotton from the stash. The idea was to use up some cones, and I did that. I threaded 32 epi.

Here are a couple of shots of the group: 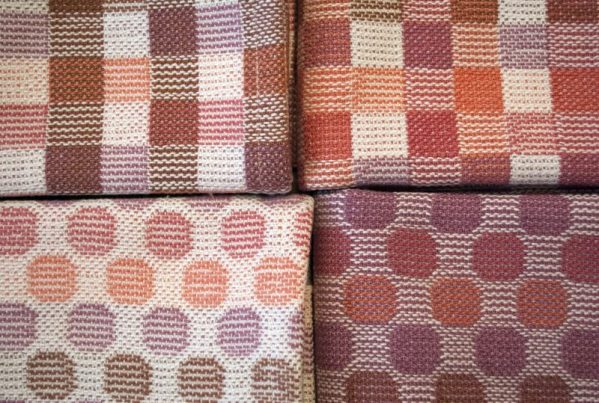 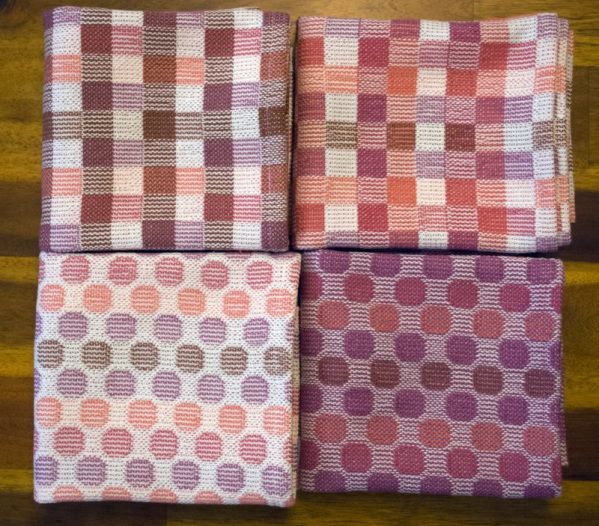 As in this drawdown:

I alternated natural and brown on one. On the second I rotated natural, tea rose and camelia.

Then I went back to circles and wove one with all mauve. The short number six was woven with all camelia.

Quite a cheerful bunch, I think. Next up, I will get them photographed and in my etsy shop. It’s a good thing, because I am currently all out of dishtowels and I need to stock up!

And I’ve been weaving circles, quite a lot of them in fact. I have the treadling down cold. All I have to do is press a treadle and I know where I am in the sequence. To date I’ve woven three warps of circle scarfs. 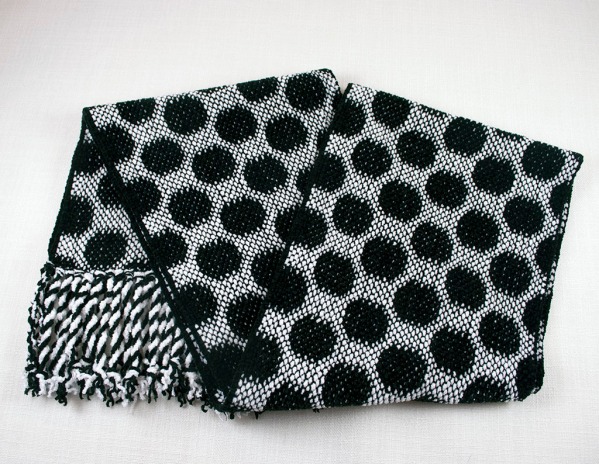 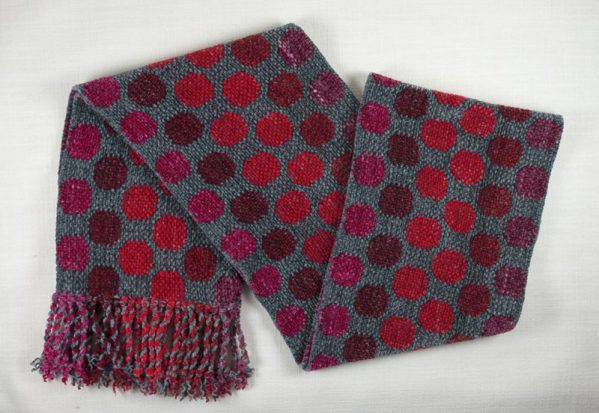 And now, gray and greens: 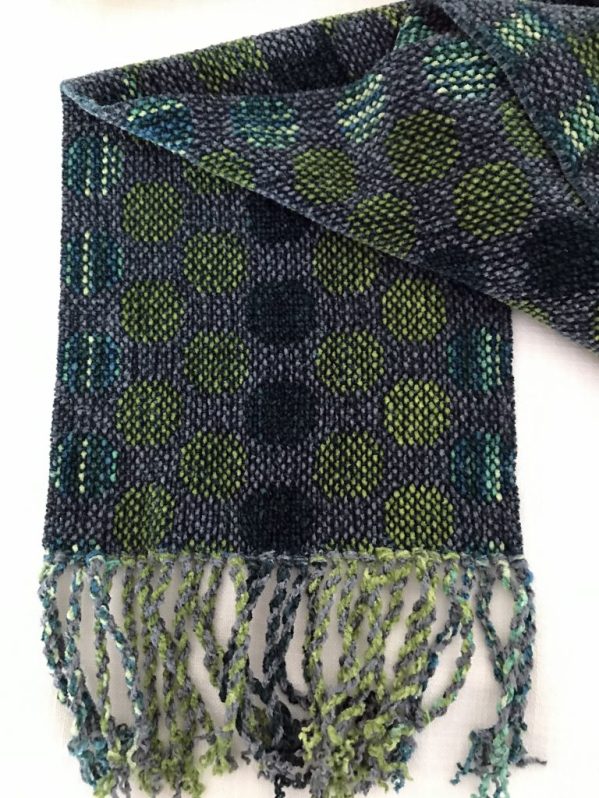 As you know, one of my recurrent themes is trying to find different designs on a threading, making it do double, triple, quadruple duty if I can. So, toward the end of the third warp I started asking myself what else I could weave on the same threading, besides circles. Heck,  maybe even the same tie-up so I wouldn’t have to crawl around on the floor. Something that folks like and want.

And just like that, I thought of checks. Sort of the yang to the yin of the circles thing. So I sat down with the weaving software and played with the treadling and came up with this little gem:

Here it is in a different colorway: 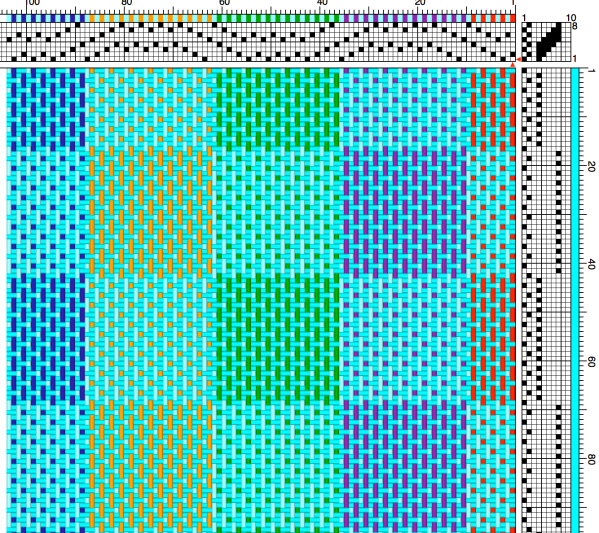 So, a dish towel warp could do extra duty and also save the weaver from simple boredom, or, worst case, falling asleep at the loom ;-).  I think this design would be fun as bright and colorful placemats as well.

FYI, for those with only four harnesses, there is a nice little draft on handweaving.net for four harness Turned Taquete checks. Shared by Bonnie Inouye, it is # 61535. As for the circles, you’re still gonna need eight.