I wrote about the “Practical Weaving Suggestions” pamphlets published by Lily Mills in my last blog post. These pamphlets ceased publication in 1971 and they were followed in 1976 by a new series, also published by Lily Mills, called “Lily Weaving Suggestions”.  These pamphlets started out, at least, in a more magazine–like format. They were in color and longer, most were 6 pages,  with stapled binding. 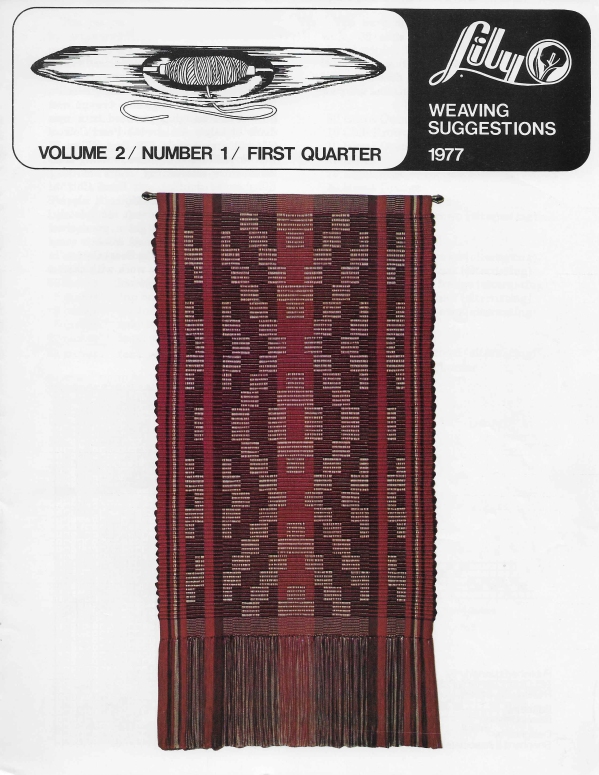 The projects were more modern, some with a counter-culture vibe, some with a more fashion-forward bent. To wit: the issue with a cover model rocking a pair of handwoven denim “jeans” 😉 .

The designers changed with each issue, and many names are unfamiliar, although some are: Persis Grayson, Elmer Hickman, Mary E. Black, Sadye Tune Wilson, Sallie T. Guy, and Clotilde Barrett.

The Lily Weaving Suggestions series ran from 1976 through 1981, with an issue coming out quarterly. The long format eventually dwindled to the folded pamphlet style, and then stopped altogether (at least, that is as far as my collection goes).

In other news, we are closing out week 1 without a kitchen, and we are on the camping-out-in-your-own-house-and-no-way-to-cook diet.