Home » Uncategorized » I Love This Stuff

I’ve been a collector of the “Practical Weaving Suggestions” pamphlets published by Lily Mills for a long time. These pamphlets go way back to the mid-20th century when weaving was often a cottage industry for homemakers. They provided all kinds projects and ideas, while at the same time marketing Lily’s weaving yarns. Sound familiar? 😉 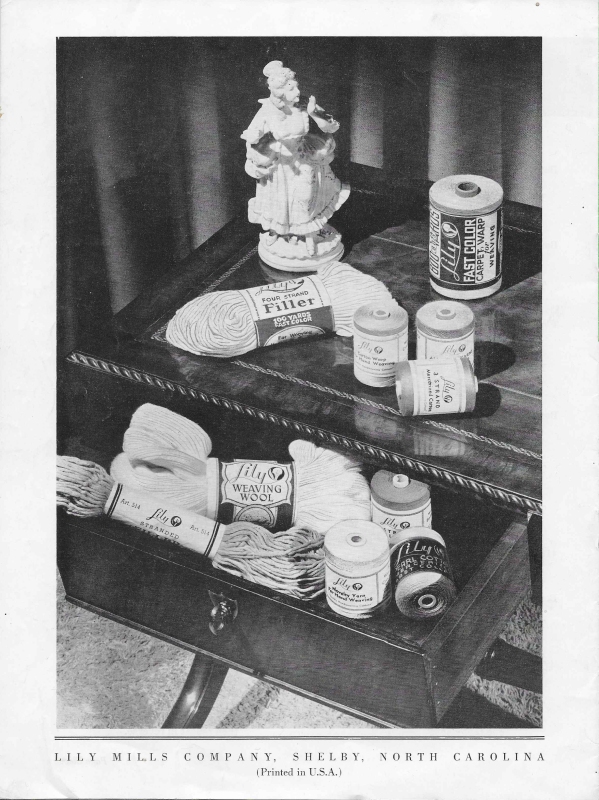 Many very well-known authors of handweaving books wrote for Lily Mills, such as Mary Atwater, Harriet Tidball, Osma Gallinger, and Berta Frey. One pamphlet titled “The Profile System of Writing Drafts: How to Adapt the Same Design to Several Techniques” by Helen L. Allen and Osma Gallinger, a seemingly revolutionary concept at the time, was a very detailed transcript of a presentation made at a national conference.

The publishing dates for the early issues are unknown to me. They are labeled by Volume and Number, starting with Vol. I, No. 1, and continuing through Vol. XXVIII. Then a different number system begins with Vol. I-55. My guess? Volume I, 1955.  The last issue in this system that I have is Vol. I-71 (i. e., 1971).  I started a spreadsheet for this collection as a way of keeping track of what’s missing and what I have duplicates of.

I don’t remember the first time I found one of these pamphlets, maybe at a library book sale, but when eBay took off, I bought a lot of them. Then recently I bought another big batch (thank you, Facebook buying and selling groups!!!).  They may be old-fashioned, but they are packed with weaving history and information, and even some very precious woven samples. Many are in very fragile condition depending on how they were treated for the last, oh, 50 or so years. Some have 3-hole punches for a binder. Some have name stickers. Some are just ragged around the edges, but aren’t we all?

Anyway, recently Interweave Press put out a call for submissions on the topic of multiple projects on a long warp. Well, I have to say that Lily Mills had that one covered more than a half century ago. And when I say long warp, we’re talking 40 yards (!). However, the projects are probably not to the taste of today’s weaver. Aprons, anyone?

In other news, I have a dishtowel warp on the loom, and looming (hahaha) plans for a full kitchen renovation. Luckily, I can weave upstairs, the cats will be boarded at the kitty hotel, and I can weave while pandemonium reigns.

5 thoughts on “I Love This Stuff”