(This blog post was originally published August 19, 2010 on my first blog site, which is no longer in existence.) 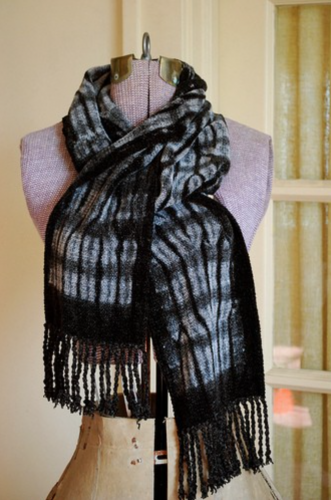 I just finished a rayon chenille weaving project that was a few weeks in the works, mostly because of travel and not procrastination 😉 . I was using the dye resist technique known as Woven Shibori and popularized by Catharine Ellis in her book by the same name.

I’ve been meaning to try this technique for some time, and having the summer basically off to pursue my projects meant I had no excuse. The technique involves weaving the scarf first before any dyeing happens. I chose some light grey chenille that I’ve had for perhaps a decade. You weave it with pattern wefts inserted every inch or so in some strong thread that will be gathered up and tied once the scarf is off the loom. 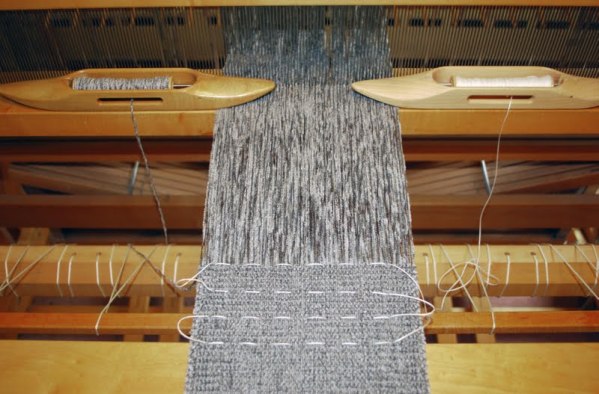 I chose a simple four harness (two block) Monk’s Belt pattern, using 5/2 pearl cotton for the resist thread. I chose that cotton because it was the only thread I could find in the stash that wouldn’t break when I pulled on it very hard. (That’s important.) The gathering of the scarf creates the resist, and it has to be pulled very tightly. I ended up re-tieing after I’d done it once, just because I wanted it to be good and tight. 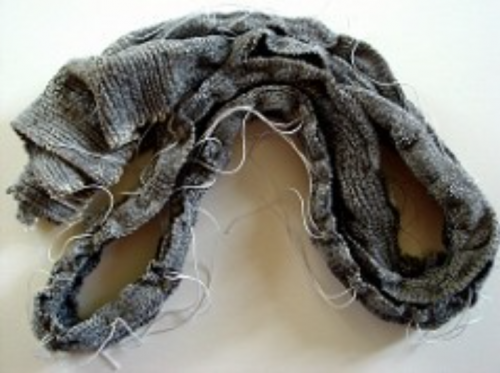 The next step is to overdye the scarf with a darker, or contrasting color, obviously a color that will harmonize with the original yarn. I decided to go with black. I dyed the scarf using my usual procion dye procedure for rayon yarn. After doing that I rinsed and rinsed and rinsed (because black is stubborn), and let it dry. I ended up waiting for 3 weeks to get back to it, and cutting all the pattern knots, revealing the resist (undyed) areas inside.

The scarf dried in pleats. So I washed it again, and dried it in the dryer to soften the chenille and all the pleats washed right out. I have a lot of commercially dyed rayon chenille in different colors, and this is the perfect stash-busting technique for those cones.

Here’s one last detail photo of the finished scarf. 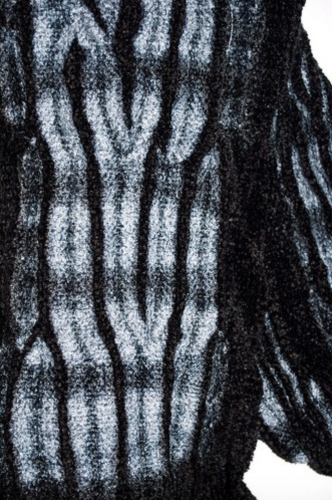