(This blog post was originally published October 30, 2012 on my first blog site, which is no longer in existence.)

Like the alliteration? This blog is practically going to write itself. And the tea towels? They’re practically weaving themselves. Really, this Turned Taquete technique is a real blast. [For the record, turning a weave structure basically means taking a two-shuttle weave and making it a one-shuttle weave. The warp will alternate colors (dark/light) or thickness (thick/thin), and the weft will be one color or thickness and on one shuttle.] 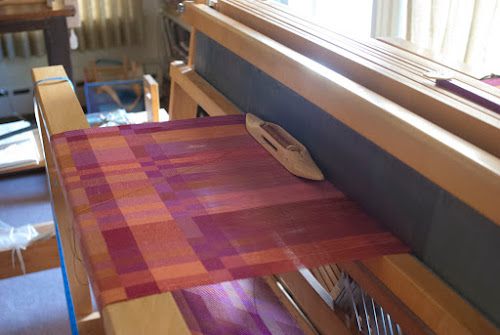 Taquete used to be called Summer and Winter until somewhere in the 90’s (yes kiddies, it’s true) when the weaving magazines suddenly decided the correct term was Taquete (there is supposed to be an accent on the last “e”, but it’s too much trouble to figure out how to do it, so just pretend it’s there 🙂 . And, by extension, Turned Taquete is the same structure as Turned Summer and Winter.

I worked up a sample weave draft in WIF ‘n Proof. Rather than an exact drawdown, this is a visual of the color and structure, from which endless variations could be teased. The threading is just a four harness straight draw. Easy peasy, right? Colors alternate on even and odd harnesses, and then switch to odd and even, creating blocks when woven. 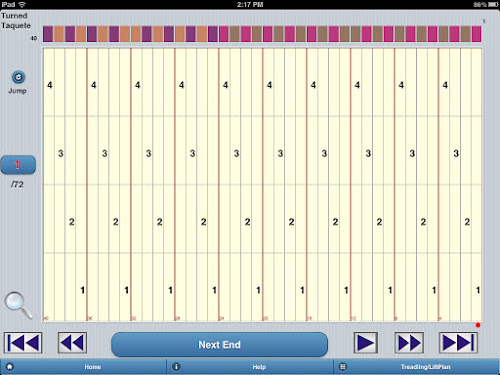 is the sequence that would normally be used in the threading of (not turned) Taquete. I changed colors when I changed blocks, and sometimes I didn’t change blocks, I just changed colors. It was all pretty much stream of consciousness weaving. On the reverse side, the color blocks will be the opposite of front side. 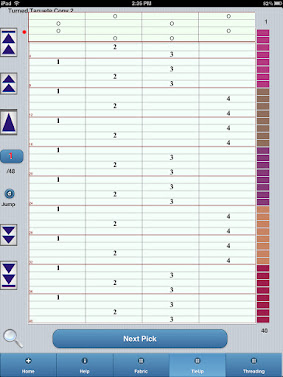 Here is a Fabric view of the above threading and treadling: 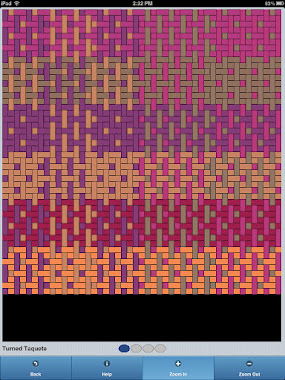 And here is a complete draft with a detail of the actual fabric superimposed below (I love digital everything): 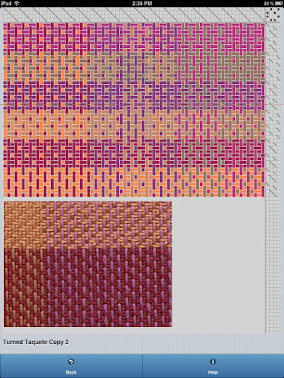 The weaving of these towels has gone super fast. Changing colors produces a mix in each block, multiplying visual interest seemingly infinitely.

Here is another shot of the loom: 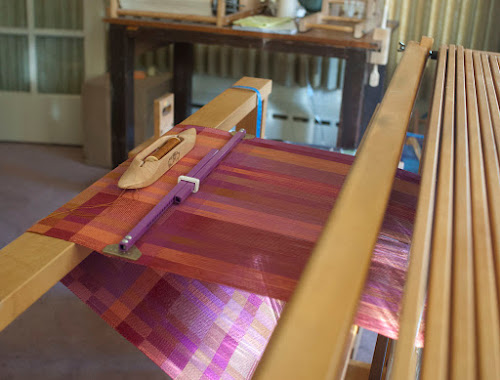 I am using a temple to weave the towels, and I love that the color goes with the weaving project.

The warp is 10/2 cotton, sett 30 epi. The width in the reed is 20″ and I’m weaving each towel 30″ plus extra for hems. I’ve got one done, and one to go. Next project I’m going to make an eight harness draft, and see what I can do about combining blocks in the design.